The Philippines has been a Spanish colony for more than 300 years, that’s why, even if the Filipinos suffered a great deal during that era, they still have inculcated a lot of Spanish culture. The most notable of it is the religion – Roman Catholicism. The Spanish was successful in converting almost 90% of Filipinos to become Catholics, up until now, the Philippines is a largely Catholic country. Festivities and celebrations are still part of the Hispanic culture, and Filipinos embraced it with open arms. Here are the top 3 famous festivals in the Philippines. 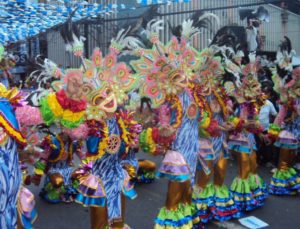 Masskara Festival
Masskara Festival is one of the most colorful festivals in the country, and it is celebrated in Bacolod City. Masskara or mascara is coined from a Spanish word for “face mask”, and every October, these “masskaras” are worn by street dancers together with their colorful headdresses and vibrant costumes. Aside from the intricate designs on the mask, it is, also, always adorned with a smile, thus the term “City of Smiles”. The festival began when the sugar cane industry of the island had hit its all-time low and a tragedy on the sea resulted to loss of lives of a lot of Negrenses. Amidst all of these, the local government thought of a way to pull the people away from the depression brought about by the crisis. The whole city community joined together to create and celebrate the festival of smiles to signify that people in Bacolod will survive and will still triumph over the bad times.

Sinulog Festival
Sinulog Festival is the biggest, grandest and the most celebrated festival in the Philippines, observed every third Sunday of January in the Queen City of the South, Cebu. It is the feast of Santo Niño, and devotees from all over the country flood the city to adore the child Jesus, but aside from the regular devotees, tourist also travel to experience the popular street parties held during the weekend highlights. More than a million participants every year join in the Sinulog dancing, since the term Sinulog came from the Cebuano word “sulog” that means water current, and the famous SInulog dance steps consist of two steps forward and one step backward. 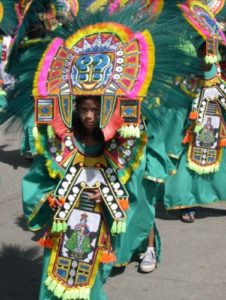 Ati-Atihan Festival
Ati-atihan is celebrated every third Sunday of January, same with Sinulog Festival, since they also celebrate the feast of the child Jesus, Santo Niño. Aside from the religious background, this festival is also a cultural one, with its name derived from the aborigines and first settler of the island called “Atis”, accordingly, “ati-atihan” means to be like Atis. Festivities will mostly last a week with devotees and tourists enjoying the merry-making events here and there. The street dancing is considered to be one of their highlights, and all dancers are painted with black body paint from head to toe to imitate the normal skin color of Atis.